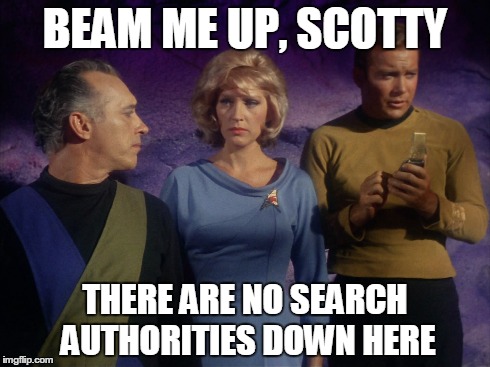 “Beam me up, Scotty. There’s no intelligent life down here.” – Bumper Sticker Slogan

Much has been written, including by me, about the death of Google Authorship. For those of us who embraced it, there are inevitable feelings of disappointment about its removal. Some webmasters are rushing to remove the code, which in some cases is good since they often weren’t using it remotely correctly from the word go.

Believe it or not, Google’s Authorship experiment has a lot in common, in terms of the challenges that needed to be solved to be successful, with the SETI Program, the Search for Extraterrestrial Intelligence. Both have been, so far, rather frustrated efforts to make order out of nearly infinite chaos, and both will depend ultimately on the signals available to them and their ability to analyze and understand these signals for success or failure.

SETI must try to isolate signals of an intelligent origin from a cosmic background of radio noise to find the proverbial needle in a haystack. The stronger a signal, the more likely they will receive it, and the more it repeats, the more likely it will be confirmed. Google, meanwhile, must try to isolate signals on the web that provide the best basis for organizing it around Search. Google may deal with as much noise as SETI, because for every line of code that matters for any given query, a near infinity of code doesn’t matter.

Their efforts to understand this code and apply it to queries are constantly evolving, as they must until such time as they can know exactly what we’re asking for, when we ask for it, often better than we know it ourselves, which is a goal unlikely to be attained soon.

In the area of Search Authority in general and Authorship specifically, Google’s mission has been most like SETI, and might even be described as “SEI”: the Search for Entities and Identities. Google ‘knows’ a great deal about Entities, like the Eiffel Tower or the musician Britney Spears, but very little about Identities, and even less about how to connect the two. They may ‘know’ that a John Everyguy ran in a 5k for charity, and that a John Everyguy just posted his 7-Alarm Chili Recipe on his personal foodie blog, because those things are on the web, but are unlikely to understand that they are one and the same John Everyguy, who lives in Everytown, USA, works at Amalgamated Widgets, is the son of Jack and Jill Everyguy, and husband to Jane Everyguy. Facebook has nearly the opposite problem, ironically.

In this area of Search, much like in SETI, strong and repeated signals are the best ‘proof of life’, while weak signals or an absence of signals can prove inconclusive. This may be why, as Authorship Markup has become deprecated in Google, Publisher Markup remains intact: Publishers are more likely to generate strong and repeated signals of their Identity. (They’re also more likely to use markup correctly.) For a similar reason, the current SETI Program is the Search for Intelligent Alien Lifeforms, instead of Alien Civilizations or People. It is easier to prove the existence of an intelligent species from the right repeated signals, than to identify their nations, corporations, or leaders, let alone their butchers, bakers, candlestick makers, and bloggers.

This is why, in its previous form at least, Google Authorship was virtually doomed to failure: far too few Authors generate strong and repeated signals of Authority. How many writers for the New York Times are as well known by name as the New York Times? And those are journalists, the very types of people more likely to create strong and repeated signals. What are they to do of the Mommy Blogger, the Private Attorney, Mama Boola the Astrologer in Fresno, California? How are they to know any of these people even truly exist, let alone that any of them are authorities worthy of higher ranking or better appearance in Search?

If this is a revelation, allow me to humble you a bit: unless you’re a writer so famous you earned an inclusion in the Knowledge Graph, like Stephen King, you probably aren’t big enough or important enough to be ‘noticed’ by Google. Sorry. Even if you were, there are still personal tastes to consider. People’s opinions of who they consider authorities can vary widely, even among readers of the same publications.

Authorship Markup was Google’s attempt to clarify and strengthen the ‘signals’ of personal authority, the way other types of code generated by webmasters serve to reinforce other signals like your content keywords. Unfortunately, it simply didn’t work out as hoped: too few used it, too few who used it used it correctly, and too many tried to manipulate it deliberately.

So the project failed miserably. Or maybe, just maybe, it succeeded in an unexpected way.

From the Moon to the Earth

Google loves its ‘Moonshots’: driverless cars, smart glasses, even human longevity. Moonshots, unfortunately, can fail, and Google Authorship as it was originally envisioned has indeed failed. The great thing about a Moonshot, though, is even in failure they can succeed. Had Apollo 11 blown up on the launch pad, we would still have made scientific breakthroughs as part of the effort. Teflon, for example, was one of the so-called “Space Age Technologies” we invented in the effort.

In the case of Google Authorship, other valuable insights have been gained which will contribute to “The Quest for Search Authority”. One of these is the limited use of AuthorRank for In-Depth Articles. Instead of focusing on Author Authority broadly, Google has reduced the focus in this case to an extremely specific type of article that appears for a very small subset of Google Searches. This use of AuthorRank is still active, even though Authorship Markup is no longer considered, because Google is paying attention to other signals of authority and identity, like frequently publishing relevant content in authoritative publications.

Another, much more important finding to come out of the project, which hearkens back almost to its earliest days, is the importance of Personalized Authority. In 2012, as part of the Google+ Project, Google launched “Search Plus Your World”, to provide a personalized Search experience by default for logged-in Google users. While Personalized Search tracks a variety of signals for personalization (like your Search History), SPYW added a heaping dose of Google+, giving a definite ranking boost in Search to your Google+ connections.

It is here that Authorship (in a loose sense of the term) and Personal Search Authority are most pronounced, with Google+ Posts and, previously, content on the web using Authorship Markup, ranking more highly if they were by someone you were connected with and engaged with on Google+. Rich Authorship Snippets were also more likely to appear. There are no indications that Google plans to discontinue this ‘Social Authorship’, and in recent months we’ve seen them bring Publishers into the same fold. However, this only applies to actual Posts from your connections on Google+ , which can receive a rank boost and can still receive Rich Snippets.

Here Google is side-stepping the insurmountable challenge of personal tastes by letting you decide: if you follow and engage with them, they assume you’re more likely to consider them authorities. If you don’t, then for you there will be no AuthorRank or PublisherRank, it simply won’t exist. In the future Google may add other signals of social connectedness (Hangouts? YouTube?), but for now it is all about the Plus.

This approach also allows Google to use a more reliable data set: your Google Identity Profile. Any spammer could set up a bit of authorship markup without doing more than filling in a few boxes on their profile, but it takes much more of an investment to make active use of Google+ and to gain and engage with followers, and the more you use it, the more confidence Google has about your existence and about who you are. This is an extremely strong type of signal, in other words.

Perhaps we should be comforted to know that, as yet, Silicon Valley cannot reduce us all to averages in their Big Data. They still can’t tell us, with any confidence, who we should listen to or trust and who we shouldn’t, or can’t make us listen if they could. Some day it may be possible to do just that, but for now the lessons Google has learned are rather timeless ones: Your understanding of something is only as reliable and complete as your data, and giving people the best service still depends on the personal touch, even in the area of authority.