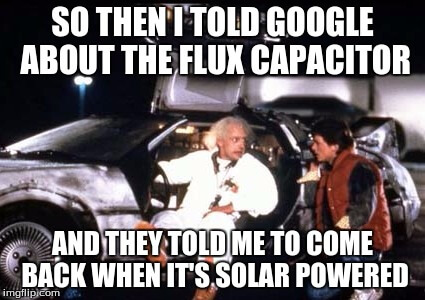 Google’s CEO Larry Page has long been noted for his insistence on something called “10X Thinking”. A joke about him tells of a Googler inventing a time machine, only to be stopped before he can plug it in by Page asking why it can’t be wireless. What this joke illustrates is that ‘10X Thinking’ is a philosophy that argues that companies should aim to make their products 10 Times Better, not just 10% Better. It demands thinking outside of the usual ‘corporate think’ boxes, and risking big failures for the possibility of big successes.

Perhaps the most important part of 10X Thinking is knowing when to cut bait, to make a clean break with “the way things have always been done” and try something so new, even though it will almost certainly infuriate some folks who are used to the way things were. In other words, it is necessary to know when to take the old thing out behind the woodshed, and just deal with the tears and heartbreak that inevitably leads to.

With that in mind, it appears that Google is trying desperately to kill at least three things we’ve all grown used to, as evidenced by their own products.

Google’s desire to kill the password (as we know it, at least) is blatant and explicit. They’ve been promoting various forms of 2-Factor Authentication (via SMS, Google Authenticator, USB Security Keys, and Mobile Popup Screens) for years. Since Android Lollipop, they have made it much easier to avoid the need for lockscreen passwords while still benefiting from them where necessary with things like Trusted Faces, Trusted Places, Trusted Voice, and On-Body Detection. Chromebooks can also work with Android Smartphones to unlock the device.

And while the technology has so far only been used to create a guest access for Chromecast, Google still owns the technology they acquired from a company known as Slick Login, which uses subaudible sounds played through speakers and detected by a mobile device as a second security factor. They have also begun testing a system to eliminate the need for debit pin codes (the ‘passwords’ of the financial world), using Bluetooth to detect the customer and withdraw the funds from Android Pay (formerly Google Wallet) by entering only their initials. And, of course, fingerprint scanners have recently arrived on Android, as well, adding biometrics to the mix.

Google imagines a future where you never give a password for anything, and yet remain secure, more secure in fact than you ever were in a password-only-security world.

Before considering this one, we have to first allow for one glaring exception: Google’s Enterprise and Education tools. Google Drive, for example, will surely continue to have filenames, and manual file organization, for the foreseeable future, due to a number of factors such as legacy compatibility, institutional workflow habits, etc…

Let us, instead, look at Google Photos. Unlike traditional photo buckets, Photos has only halfheartedly (and often retroactively) embraced manual naming and organization. In fact, the Photo team’s goal seems to have been to build the ultimate tool for automated organization and tagging of photos, so that you, the end user, don’t need to do anything, and your camera need only shoot pictures and maybe tag them with geolocation data. In their ideal universe, the app does the rest of the work, including prompting you to delete local copies of images and videos whenever your device memory runs low.

Google Photos may or may not ever be the best tool for professional photographers, passionate amateurs, and people who love to organize the heck out of their photo collection themselves, but it doesn’t appear either as if this service is being built with them top-of-mind.

It is, instead, seemingly built for the average bloke with a shooter in their pocket, and at least an occasional desire to look back at the things he shot, and who also hates moving files off his device when the memory fills up. For those users, and probably for other types of users in the future, Google wants to kill the manual naming and organizing of files.

This one is the Holy Grail, and for now they are clearly a long way away from Utopia (and the same provisos for enterprise and education software given above still apply), but Google is showing hints that they do indeed wish to kill the manual editing of files.

For now at least, we are not talking seriously about eliminating file editing from Google Docs, Google Sheets, or anything of that nature where ongoing and detailed manual editing is a must. To do so badly, in fact, would risk repeating the ‘Clippy’ nightmare Microsoft once birthed into the world from some foul Lovecraftian abyss, and to whence it has returned to its slumber.

Let us instead look again at Google Photos, and also at YouTube. Google Photos has its Assistant feature, which descends directly from Google+ Photos ‘Auto Awesome’ technology. In addition to automatic photo enhancement, this tech automatically creates gif animations,, removes unwanted people from a shot or removes people entirely, applies hdr and other filter effects, makes videos, and even whole Albums (complete, in some cases, with embedded Maps). While Photos Assistant can be used manually, the real magic is that everything it can do manually, it can also do automatically, given the right photos and videos, timestamps, and geolocation data to work with.

YouTube, meanwhile, gets better and better at suggesting automatic edits and improvements to your videos, and while this is still a far cry from the (ultimately) intended ‘set-it-and-forget-it’ nature Google Photos Assistant also aspires to achieve, it’s clearly heading that way.

Out with the Old, In with the New

The most dangerous assumption to make in the technology world is that the way things are now is the way they should be. Many of the best ideas of the era before cloud services and sophisticated AI came about would actually be terrible ideas to come up with today, and yet so rarely can people step back from the mindset of their own times and say, “Perhaps this isn’t the way things ought to be. Perhaps there is something better, after all.”

If Larry Page has his way, this is a mindset Google will always try to avoid.